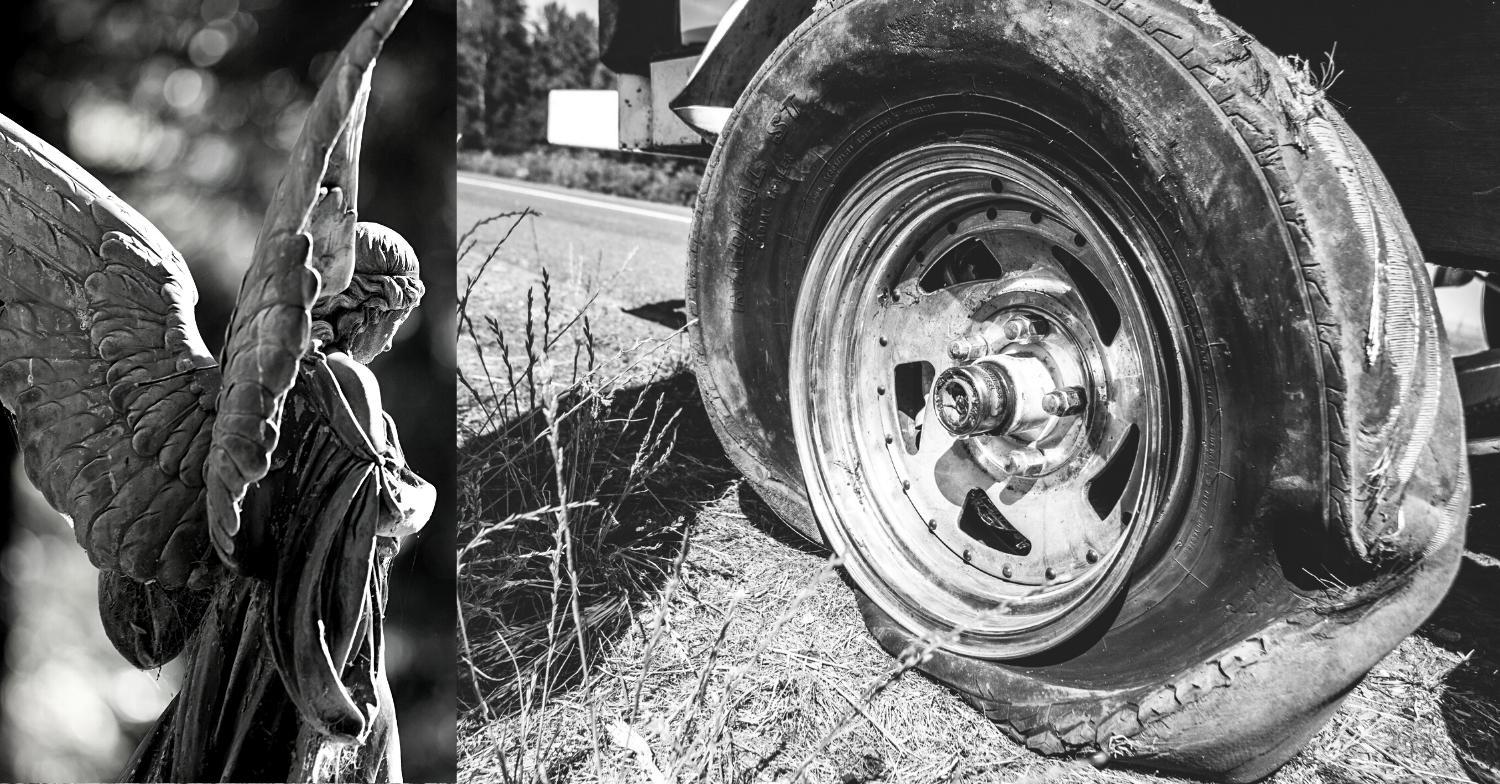 There was an incident which happened a couple of years ago which I thought was pretty unusual. It was in the dead of winter. It was a bad, bad day. My husband Charlie had to go out somewhere. He was on the freeway I and a tire “blew”.

This was two o’clock in the afternoon. Charlie told him what happened. They both agreed that there wasn’t much left of the tire. Charlie had to ruin it getting off the freeway.

This young fellow stayed with Charlie. He took him to a place that sold the kind of tires that Charlie liked. (He always liked to keep good tires on the car.) Anyway, this young man went and carried Charlie to buy a new tire – then brought him back and helped him put the tire on the car.

They went by the fellow’s house and got something to eat and drink. In short, he fooled with Charlie all afternoon before he finally got him back on the road. Charlie called me and told me what had happened. He told me all about this fellow helping him. Anyway, it was almost dark before it made it back, but he got home in one piece.

He next morning, Charlie said, “I want to send that fellow some money. This guy took a lot of his time to help me. I think we ought to send him something.”

I said, “Fine, what do you think that we ought to send him?”

We decide how much we thought we could afford. It certainly wasn’t as much as his time was worth probably, but we wanted to send him something. I picked up the phone and called the number Charlie had insisted on getting. (I wanted to ask him for his address.) I identified myself when he answered and said, “You know, you’re an angel.”

He replied, “I’ve been called many things in this life, but angel was never one of them.”

He said, “You know, that was funny yesterday. I was off from work. I decided to go out to the lake and just mess around. The weather was too bad to fish. I just wanted to get out of the house for a while.”

This fellow continued, “I passed by this car with a man standing by it looking down at the wheel. It was so cold, down on the low teens. It had just started sleeting. The weather was really bad that day.”

He said, “I passed on by. But just as I did, it was as if a voice spoke up inside of me. Something told me to stop and help the old man. It said that he was going to die if I didn’t go back there and help him.”

The fellow told me he went down to the next corner and turned right. He circled the block and came up behind Charlie. Of course, Charlie didn’t know all of that. He just knew that somebody came up behind him and stopped.

Anyhow, he said it was odd how the voice, whatever, had just said to him, “If you don’t stop and help him, that old man is going to die and it isn’t quite time yet.”

I think he was a bit touched by the experience, too. Anyway, that was the last that I ever heard of the man. Whether he was an angel or not, I don’t know. If he wasn’t, he was sure doing an angel’s work.

Note: Hundreds of “Charlie’s” friends and family were so grateful to have a couple more years with “Charlie”. He had a talent for giving joy and unconditional love to everyone who knew him. He went on to be with his God in Heaven when he was almost 90.

Excerpt from Angel Power, Angel Love. Other books by Billye are The Essence of Loving and Women Pioneers in 12 Step Recovery.