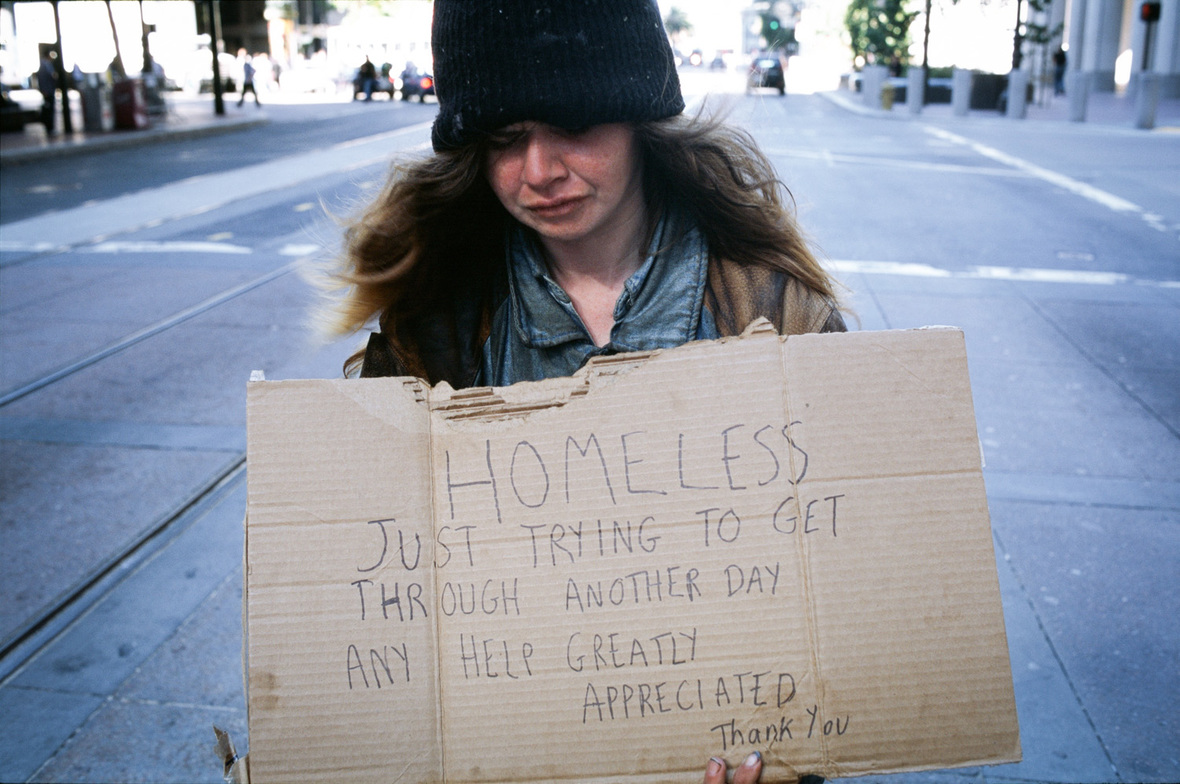 As I drove home today I was listening to some music from my younger years.  I love music that paints a picture…tells a story…stimulates the thought process.  Like a lightning bolt from the sky streaming from my Spotify library through the Bluetooth and into my car stereo the words and philosophical message of Phil Collins’ hit, “Another Day in Paradise,” flowed to my ears and ignited my brain.

Although I’ve heard and sung this lyrical treasure hundreds of times, the words and the mental images washed over my soul and triggered my emotions like never before.  The vivid description of a young homeless woman mired in poverty, hopelessness and pain tugged hard at my heart strings. I was suddenly cast into looking through a different filter at this life and those like this young woman who literally beg for our help. How have we let our personal beliefs, popular generalizations, and politics overtake our basic human instincts and love for others?

The reality that slapped me right in the face was that this day and every other day, I truly am living “another day in true paradise.” It seems that the whole world, including me at times, turns away from the ugliness, pain and heartache right under our nose. We move instead to the other side of the road like in Jesus’ parable of the Good Samaritan. We pretend not to see or acknowledge the suffering that continues to collect in the empty shells of humanity under our bridges, in make shift tents and on our street corners with a cardboard sign and a 7-Eleven cup of change. Life in real time and up close is often hard to stomach.

Poverty, hunger and hopelessness are real and growing more prevalent every day.  What we as a society used to shove to the other side of the tracks or relegated to a shanty town type of existence has now blossomed onto almost any busy city street and intersection.  Poverty, hunger and hopelessness know no color, creed or sex. It is hard to ignore when the truth is right in front of us.  Yet somehow we manage to do just that.  We look for justification by vilifying those souls and labeling them as addicts, lazy, stupid, crooks and other select degrading generalizations.

We somehow fail to see the military veteran with PTSD who can’t get an appointment at the VA for six months.  We look past those who indeed might have mental and addiction problems.  We fail to understand the dynamics of finding a job when you are a rehabilitated felon who has paid their debt to society but still are repeatedly turned away.  How did we allow so many of our brothers and sisters to get to this point of desperation and despair?  When did looking the other way from a human in need become the new and acceptable norm?

We talk about values from our pulpits and houses of government, but shun the reality of actually wading into the muck and getting our hands dirty.  Our elected officials can waste vast amounts of money on the next great weapon or pet project to aide their re-election campaign, yet they rail at the thought of a social program that might pay a livable wage or to provide a ground floor level of food, shelter and healthcare for all Americans.  Some boast that the system of “trickle-down economics” is the answer, while in reality the trickle gets no further down than the corporate board rooms.

Despite what some want us to believe, most people in desperate need only want an opportunity and a level playing field.  Shamefully, we respond to those pleas with curt responses like, “pull yourself up”…“get a job”…”quit being lazy”…”make something of yourself”.  Have you ever considered how much energy, determination and creativity it takes to survive on the streets with nothing and no one?  You think your days are hard?  Try waking up hoping for enough change to buy a sandwich and a cup of coffee while your tent keeping you out of the rain is trashed by those in authority because it’s offensive to the general public to have to see such an eyesore.

Have you ever given a few dollars to the person on the corner with the cardboard sign stating “Homeless, please help?”  I have and often do and have had my share of criticism over that simple act.  “You’re wasting your money…They’ll just spend it on drugs or alcohol…you know it’s a money making racket.”  I have heard them all.  Frankly, the few dollars I choose to share in this manner is no one else’s business. My other perspective is that my act of giving releases the money into the hands of the receiver to use in a manner they deem most beneficial to them.  I’ve done my part in the circle of love by giving an unconditional gift.  The use of that gift is up to them.

A close friend of mine sent me an email a few weeks ago with some very insightful thoughts.  He brought attention to the fact that in the game of life, we don’t all get to run the same race.  Many of us by heredity, a bit of luck and the grace of God get a sizeable head start.  Others of us start with a significant handicap but gain advantage along the way by chance and by having the more acceptable skin color, heritage or educational opportunities.

Problematic to this entire situation is our assigned rank on what I call life’s Double “P” Scale.  The Double “P” Scale has Privilege at one end and Poverty at the other.  Most of us fall somewhere comfortably in between.  Many struggle daily to climb out of the debilitating grasp of the poverty end.  My friend reminded me that he and I both started our lives a bit different but that we both quickly rested on “second base” in an analogy that we were halfway home upon entering the game.  Both of us are white males.  Both of us had loving and supportive families.   Both of us had significant encouragement.

Pulling yourself up by your boot straps is only possible if you own a pair of boots.  Applying yourself in an educational setting only provides a window to a bright future if you have a quality and equal opportunity to be taught and learn free from discrimination and bias. Making something of yourself is only possible if you are afforded the raw materials and tools with which to build.

That brings me back to the plight of the woman in the Phil Collins’ song…no food…no home…no shoes…no hope.  She desperately pleads for help as person after person ignores her basic human needs.  I am baffled how we have billionaires who will spend untold fortunes to send four or five celebrities for a five minute space ride while asking for tax breaks that could bridge some huge social gaps.  We overlook or ignore the need for affordable housing and basic shelter and food for the poor and homeless.  We build huge marketplaces in high dollar suburban areas while leaving no healthy food sources within miles of those on the poverty line.

Why do our City Councils work so hard to find ways to remove even the basic shelter from the homeless like a tent under a bridge while providing no end plan or solution to solve the root of the problem that necessitated them?  I know that we all see these souls.  Why is it that many just don’t care?  Just maybe, if we could provide basic necessities to the single mother working two jobs, she could finish that GED…gain some more marketable skills…secure a better job and future.

My heart and mind have told me since I was a young boy growing up in Mobile, Alabama that something wasn’t quite as advertised.  I would ride with my parents to drop off “The Help” at a shanty by the tracks that may or may not have had indoor plumbing and clean running water.  I traveled to Sunday school to sing the songs that professed that,

Why did those teaching me those songs and professing those claims provide many of the greatest barriers and resistance to equality and justice for all?

Maybe we are all just too comfortable with the status quo and the enjoyment and perceived entitlement to “just another day in paradise.” Maybe we should reconsider getting uncomfortable with thousands of homeless and starving human brothers and sisters.  Maybe we all need to take a hard look at the current Double “P” Scale and see how we can provide the spark that becomes the tipping point for equality.  Maybe as my friend mentioned, “We need to become our brother’s keeper until they can find the same tools, support and encouragement to meet us at the finish line.”